skip to main | skip to sidebar

A lho stick dangling between her lips, Lyll was mindlessly watching the battle unfolding miles aways from the top hatch of their dedicated Mark III Chimera, her arms carelessly wrapped around the pintle-mounted heavy stubber.
The air was heavy with the scents of war, a horrible yet too familiar mix of iron, ashes, death and despair.

The heavy voice coming from down the hatch belonged to Zeth, the Chimera’s driver. Lyll shrugged and answered with enough sarcasm in her voice to fill a Baneblade.

“Do i look like a coghead ? Our engine is almost dead and i don’t think the Emperor would love us to explode on our way because we push it too much.”

“Only in Death does Duty End” shouted Olly, the gunner, with a pious tone, the eye on his heavy bolter visor, slowly scanning the surroundings always on his guard.

“I prefer, Only in Useful Death does Duty End” answered Lyll.

“I prefer this one too, Boss” added Zeth.

Lyll bent herself to try to have a look at their Chimera’s side where an enginseer was working on their broken engine. She shouted at him/her/them.

The enginseer took a step back from the engine, many of their dendrites still plugged into the old vehicle. Instead of wearing the classic red robe of the Mars priesthood, they were wearing a kind of grey long coat heavily decorated by handmade paintings. Three red cyberoptics gazed at Lyll for a second before finally answering at her question with an artificial voice.

“Your engine is fixed, it has to cool down a bit and I have to run secondary diagnostics, so you should be able to go in around fifteen minutes. Just like a new ! Well, not really i can’t do magic but still in much better shape than what you had before... which all considered was not a big challenge.”

This coghead was strange noticed Lyll, well stranger than usual for a Mechanicus priest and in a good way. They still looked more robot than human and their voice was disturbing but something in their way of moving and their speech was almost… friendly. Lyll grasped a small metal flask in her back pocket and sipped some of its content.

“Hey, would you mind sharing some with me ?” asked the artificial voice.

“No, of course” answered Lyll surprised before throwing the flask at the enginseer, “I didn’t know your kind of people drank, be careful it’s a strong one.”

Grabbing the flask with a dendrite, the priest quickly poured some into a cavity in their chest before commenting.

“Technically speaking, most of us don’t need to drink, we can absorb the water we need from the atmosphere or by recycling our own liquids. But on Cluniacus, among all our originalities, we have kept the taste for a good alcohol, and yours is a good one, even if not so strong.”

Lyll looked at this strange character. She realised she was clueless about the enginseer. She thought they were all the same, all from Mars, all red, all formatted to be boring, dull and deeply in love with machines and so she asked the first question which crossed her mind.

“What is Cluniacus ?” The enginseer turned their head toward the tank commander. Lyll was sure that their dendrites were wriggling of joy and excitation.

“That’s a very good question, i am glad you asked. Let me tell you more about my homeworld” 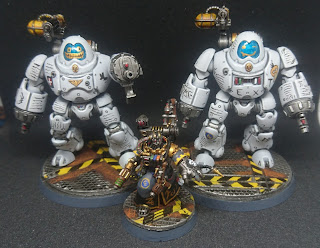 Cluniacus is a small Forgeworld located in the Segmentum Pacificus far away from anything really interesting.
It has been colonised a very long time ago, well before The Great Crusade, during what is commonly known as The Dark Age of Technology.
At this time, a noble Explorer/Warlord called Francis Alexander Charles of Stonemaddow, duke of Lyonrun was charting and colonising this part of the segmentum mainly through the use of war if needed.

Despite his bloody tendencies, Stonemaddow was also a men of science and that’s why he decided to install a group of facilities and laboratories on a backwater planet to sustain his armies in weapons and equipments.
In his Hubris, he named this planet Lyonrun’s Farm and he left there some of his best engineers to manage the whole installation.

As Stonemaddow was requesting more and more from the Farm, it became quickly obvious that there wasn’t enough workforce to sustain the demand. So he decided to send all the orphans from his troops resulting of his wars to the Farm, in order for them to be trained as engineers and/or soldiers, a kind a Schola Progenium before they were even thought with less discipline and much more beer.
Because when you gather a lot of young persons and you train them to use their brain, work together and fight together, you create a strong link of fraternity and organisation to throw big parties when they can.

And so the Farm grew quickly and soon new formation centers were created all around the surface. A healthy rivalry quickly started between each of them. Yearly events were soon organised to share and measure which one was the best… and of course celebrate in huge parties.
But the biggest celebrations were held on two separate occasions, one when the youngest new generation ended all the initiation’s rites and one when the oldest one left the planet to join Stonemaddow’s armies.

Stonemaddow’s life finally ended during a stupid useless war and his Farm, lost in the armpit of the Segmentum, got slowly but surely forgotten. Almost at the same time, the Dark Age of Technology ended and the Age of Strife began.

Without Stonemaddow’s support, the Farm was withering and would have disappeared without a rather unexpected event.
This event was the sudden arrival of a colonial ship from Mars. The ship was half destroyed and about to crash after facing the brutal warpstorms, which were very common at this time.
The Farm’s engineers went to the rescue of the ship, welcoming it for all the resources and the fresh blood they were bringing.
Once the situation securised, the leaders of the Farm’s met the leader of the ship, a noble Princeps leading the Legio Titanicus 133 and its sworn Knight house to discuss their future.

The Princeps Phuphus had won the right to colonise a new world and was travelling with their hold full of STC and frozen embryos. Sadly, most of the ship casualties were the techpriests in charge of the colonisation.
The ship being unable to leave the Farm and the Farm being in need of new ressources, they settled easily on an agreement.
Phuphus and their Legio would settle on the Farm, giving their resources to upgrade the formation centers and in exchange all the planet would convert to the Machine Cult and swore allegiance to Legion 133.

It took years but in the end all the formation centers become nine fully operational Forges :

And they faced the long night of the Age of Strife with success, welcoming the Great Crusade and the Emperor of Mankind.
The reunion with the Mechanicum was not easy as all the Farm’s traditions mixed up during thousand of years with the Mars’ ones creating a unique entity, very proud of its originality but not very good with the official creed.

“Sorry, this will be all for today. Your machine is ready to roll out ! Thank you for listening so carefully.”

Lyll smiled slightly. She was starting to understand a bit better the priest.

“You are welcome. And I would love to hear more, sounds like it’s only the beginning. And you owe me a drink ! I want to know more about your famous alcohols ! What’s your name Coghead ?”

“I am known as T133CL204” answered the enginseer “but you can call me Maam’s, I have learnt in the past that our identification codes are not popular for most Imperium citizens.”

“See you after this battle Maam’s, I am Lieutenant Lyll” nodded Lyll before shouting with all the strength of her lungs “Lads !! Get your asses back in the Chimera, it’s time for you to win this war !”

The dozen of Imperial Guard who were waiting in the nearby field that their Chimare got fixed ran to the back of the vehicle before Zeth drove them all to battle.

Maam’s and all their dendrites waved at them, wishing them good luck and the protection of the Omnissiah.